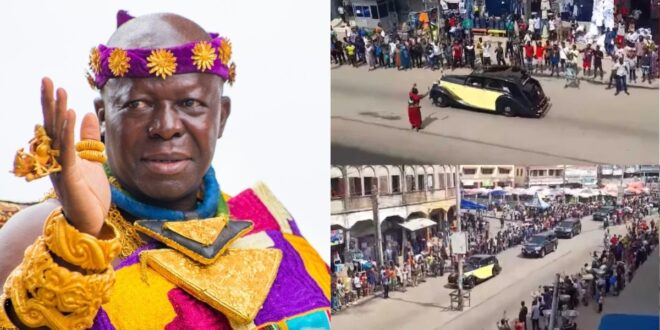 As he rode around Kumasi on Wednesday, April 28, 2021, the Asantehene Otumfuo Osei Tutu II got thunderous applause from his subjects.

Otumfuo paid a visit to Adum, Kumasi’s central business district, to perform a rite as part of the Awukudae festival.

One of the two major Adae festivals of the Asante people is the Awukudae festival.

In a long caravan of luxury trucks, the Asanthene arrived in Adum.

The king travelled in an old Rolls Royce among the cars.

Many merchants and other residents in the Hello FM area of Adum trooped to the street to cheer on their king when they saw his convoy.

In a video obtained by Buzzgh.com, one woman, overjoyed, could not help but move closer to the streets, while others lifted their hands in salute to their leader.

According to available information on the internet, a total of 3,827 20/25s were made, with over 70% still on the road today.

This one, which Otumfuo Osei Tutu is using, is around 86 years old and has been used by three Asantehenes. In 1935, Otumfuo Osei Agyemang Prempeh II was the first to employ it.

According to Asante historian Safo Kantanka, Prempeh II was first used during the Asante Confederacy’s reunification durbar in 1935.

After Prempeh II died in 1970, Opoku Ware II took over and drove the car in his 29-year-old.

After succeeding Opoku Ware II in 1999, Osei Tutu II is the third Asantehene to use the motorcycle.

The Awukudae festival took place only two days after Osei Tutu marked the 22nd anniversary of his golden stool ascension.

In the meantime, Otumfuo will celebrate his 71st birthday on May 6th.