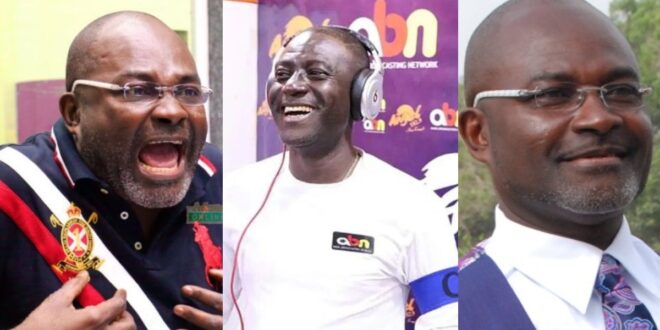 Kennedy Agyapong, a member of Parliament for Assin Fosu, has gone off on Captain Smart, a radio host.

Captain Smart was recently suspended from Angel Fm for attacking the government excessively, putting pressure on his employer and resulting in a 30-day ban.

Captain Smart is well-known for his harshness against governments due to injustice, and his display ‘Fabe wor so’ is no exception.

Kennedy Agyapong, who was on the hot seat on Net2 TV yesterday, referred to Captain Smart as “cheap” because he owed him Gh 10,000 for the past three years.

Though he would ask his party to listen to any of what the radio host said, the lawmaker claims that he made a mistake on the show that led to his suspension by claiming that if you owe, you pay, despite the fact that he has been owing him popular GHC 10,000 for three years.

See also  'My husband has brought me nothing but shame, I returned to Ghana with nothing'- Nayas
Share