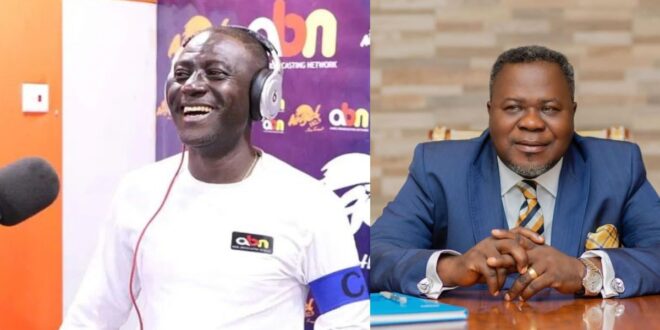 Video: Captain Smart finally breaks silence after he was sacked from Angel FM

After his birthday party on Wednesday, May 5, Captain Smart was formally suspended as the host of Angel FM’s morning show.

Captain Smart claims that after his show on Wednesday, Samuel Kofi Acheampong a.k.a. Bronzy, the Chief Executive Officer of ABN, called him on the phone and told him that “there is too much strain coming from the left-right-center” on ABN’s founding President, Dr. Kwaku Oteng, and that Captain Smart should contact the President of ABN.

“I told him that the night before yesterday [Wednesday], I have had an information that some people have met at the [Labone] Coffee Shop to plan what should happen,” Smart told the host of Good Evening Ghana on Thursday, May 6.

He went on, “so yesterday [Wednesday] on air, I said that look if today, Kwaku Oteng says Captain I cannot work with you again, praise God. I will leave. I won’t be hungry because I’m not a lazy person; my brain works.

So, I called Dr. Kwaku Oteng and he said some people within [….] Akufo-Addo’s government is calling him and has been writing him letters from Ghana Revenue Authority (GRA) just because they say I talk too much.

Captain Smart reported that he, Captain Smart, had stated in one of his morning shows that Akufo-Addo, Dr. Bawumia, Alan Kyerematen, and the IGP are all fools.

“So, I asked on air? And he [Kwaku Oteng] responded that yes, you said it on air,” Smart narrated.

“So, I told him that sir, I can say all sorts of things in this world but to go to that extent to say that the President of the land, the Vice, the IGP, and Alan Kyerematen are fools, no! if you can provide me with the evidence, I will apologize to the world and resign from your company.

In the course of the conversation, he told me that because of the pressure, when I close from work today [Thursday, May 6] he would want me to go off air for some time and when the pressure from above comes down, then I can resume. So, I said ok if that was going to help you, [fine]. Because I am just one individual and you have all these companies, if Captain Smart alone will bring your company down, why not, I will do that [step aside] for you.”

Captain Smart went on to say that after the normal introduction to his program on Thursday, May 6, Dr. Kwaku Oteng told him that “there is already pressure on him,” so he [Captain Smart] told his boss, “Senior, let me drop it.”

He went on to say more The General Manager of Angel 102.9 FM, Kwadwo Dickson, was asked to give him his suspension message, but he refused because it was very late, so he took a picture of it and sent it to him through WhatsApp.