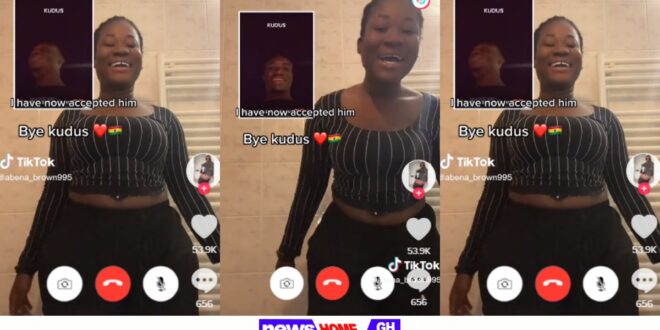 A Ghanaian woman with a lot of curves made a video of herself talking to Black Stars player Mohammed Kudus. This video went viral on social media and caused a lot of trouble.

People on the Internet said in the comments that the original video is an old video where Kudus was praising a famous Ghanaian musician named Kweku Flick.

Kudus was seen in the video performing one of Kweku Flick’s all-time bangers, “Money,” which was released in June 2020.

One part of the video that piqued the interest of many netizens was how the young lady with the account name abena brown995 altered the video to appear to be on a live video call with Kudus.

She also spliced the second section of the film, where she was shooting her shot at Kudus, with another viral audio. She implied that she has a crush on him, and Kudus agreed.

Ghanaians can do editing paaaa oh

In Kudus we trust

It reminds me of junior Agogo, the way the girls were crushing on him

Keep on feeling him

He did this video a long time ago. He was giving Flick a shout-out. Anyway nice edit