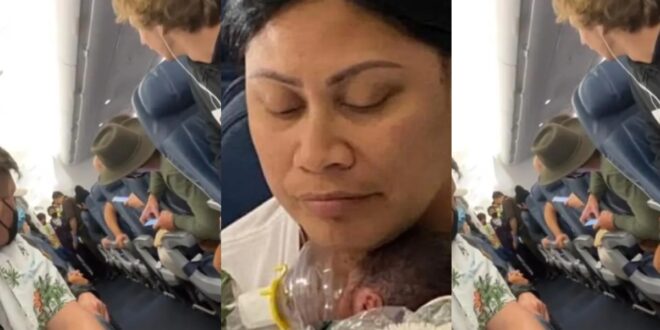 Surprise! Woman who didn’t know she was pregnant gives birth on a flight – Photos

Lavinia Mounga, an Utan native woman, received the shock of her life after bearing her pregnancy for nine months without realizing it.

The Mounga lady was on her way to Hawaii with her family when she started getting contractions on Wednesday, April 28.

After one of the passengers, Julia Hansen, announced the news on TikTok, Mounga’s story went viral saying, ‘A baby was just born on this plane.

People can be seen in the video congratulating and celebrating the new mother for her amazing mid-air feat.

Hansen said that he sat next to the family on the flight and that neither Mounga nor her husband was aware of the pregnancy.

“To those wondering how she was able to fly in her third trimester, I sat next to her dad on the plane, and he said they didn’t even know she was pregnant,” he stated.

The birth was aided by many nurses and doctors who were on the flight.

Lani Bamfield, a nurse from Kansas City, also announced the news on her Facebook page.

“If anyone would like to know how our trip to Hawaii is going, here’s how it started. We delivered a 26-27 weeker in the airplane bathroom, in the middle of the ocean, with three NICU nurses, a Physicians assistant, and a family medicine doctor; we were able to make it three hours before we could finally land, but the baby and mom did great,”

Before they were admitted to the hospital after the plane arrived in Honululu, the mother called the baby Raymond Kaimana.

See also  One of the conjoined twins that Nana Aba Anamoah is helping to separate dies.