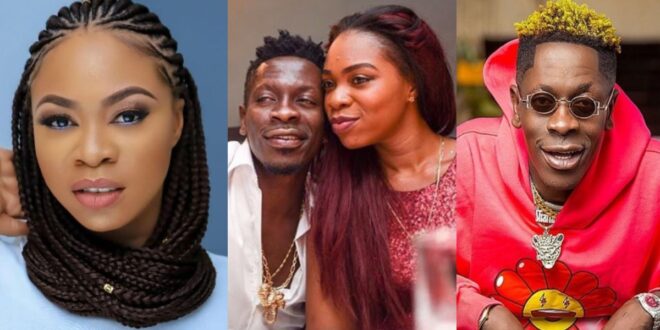 Michelle Diamond, better known by her stage name Michy, rose to fame as Shatta Wale’s girlfriend. She has now talked about how their breakup has affected her.

She said that four years after their breakup, she is still being referred to as his lover. Despite the fact that they have both moved on, Michy claims that people continue to bother her with reminders of their prior relationship.

During an interview with Kwaku Manu, Michy talked about an odd thing that happened with a waiter. This showed how much fans still connect her with the dancehall performer.

“January 5th is my four years anniversary of singleness but people still tag me with him. Someone takes me out on a date and a waiter screams paah paah when he sees me. I have to alert him that I was brought out on a date and that I am not here alone.

As for the name “Shatta Michy,” I think it has come to stay. There is nothing I can do about it. I have tried but people still call me by that name, so I have left it as it is. “We have broken up, but it seems I’m still the original Shatta Michy.”

Michy, on the other hand, has stated that she is open to a new relationship. She has also revealed the attributes she is looking for in a mate this time around.

“I’m open to anyone who is stable-minded, mature, and rich.” As for being rich, it is a must. I have learned my lessons from suffering with a man. I’m not towing that lane again,” she added.

Also, Shatta Wale’s ex-fiancée has revealed that despite the termination of their relationship, she still has a lot of respect for him and does not want to harm his career.

Michy claims she’s known Shatta Wale since the beginning, and while they’re no longer dating, she’s careful in her interactions so as not to tarnish his reputation.

Watch her video below;