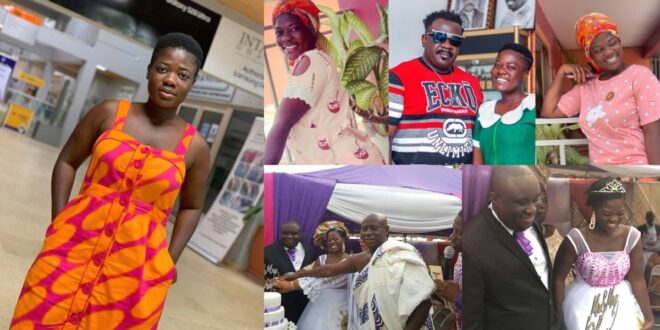 Asantewaa, a Ghanaian Tiktok star, grew to prominence during the Covid-19 lockdown, when Tiktok became fashionable and most Ghanaian people became addicted to it.

Fast forward to today, she has a sizable following on many social networking sites, many of whom adore her and are excited to learn more about her.
Many of Asantewaa’s fans have claimed that she is dating her manager, Cassius, but she has repeatedly said that she is married.

Finally, Asantewaa’s wedding pictures have emerged on social media, confirming that she is married, as she has been informing Ghanaians for quite some time.

The pictures were taken four years ago at her formal wedding ceremony. At the tender age of 23.

The pictures were taken four years ago at her formal wedding ceremony. At the tender age of 23.

we have uncovered the name of the guy in the young lady’s life, which is fascinating. Jeffrey Obiri Boahen, a senior executive at Anglogold Ashanti, is the young man in question.

Jeffrey Obiri Boahen is the son of NPP chief Lawyer Obiri Boahen, according to what we have learned so far.

Under former President Kuffuor’s government, lawyer Obiri Boahen served as a Minister of State in the Ministry of the Interior.

Obiri Boahen is the New Patriotic Party’s acting Deputy General Secretary (NPP). So, Asantewaa is marrying into one of Ghana’s wealthiest families.