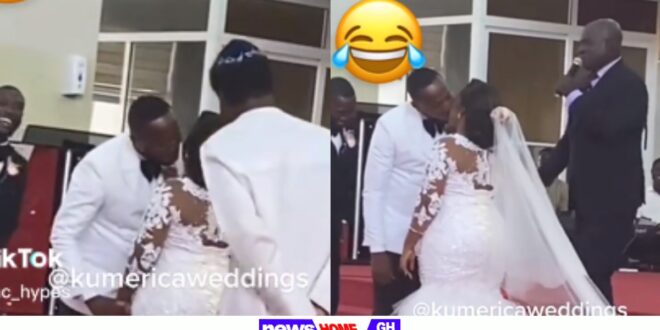 A father’s video of the kissing session that took place during his daughter’s wedding became popular on TikTok after he directly interfered with it.

The clip, which lasted 22 seconds, was shared by CNBC Inc. Hypes on November 16 and showed the man stepping up to the stage during the kissing section.

The groom and bride kissed for the first time, but it looks like the father did not approve of how the kiss was performed.

Everyone was caught off guard when he asked for the procedure to be repeated and then moved closer to see that they did it well.

After the second session, the father burst out laughing on stage. The man’s actions caused a commotion among the wedding attendees.

“Father of the year.”

“Father is happy about the marriage and is very good for such marriage.”

“This is when you paid the bride price in full without asking for reduction.”

“My own father run inside when somebody’s som was abt to kiss me. Ha the kissing we kiss already.”