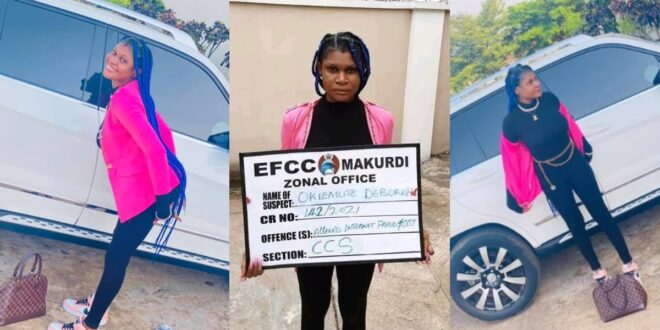 The Economic and Financial Crimes Commission, EFCC, has arrested a said to be sakawa lady identified as Deborah Okiemute, also known as Sassie Dira on Facebook, after she flaunted her lavish lifestyle online a few days ago.

In Makurdi, Benue State, Nigeria, the young lady was arrested along with four other members of an internet fraud ring.

Following an intelligence briefing on their suspected illegal activities in and around Makurdi, the perpetrators, Gideon Damisa, Sunday James, Friday Ebosele, and Okiemute Deborah, were apprehended by Commission operatives.

Sassie attracted attention when she shared a picture of her latest flashy car with the caption:

”First day of the month looking absolutely stunning as usual, fake life at its peak but don’t borrow clothing to show off fully focused for the kingdom and the king’s spec only those with Royal blood should DM,’‘

The suspects were apprehended last Saturday in Makurdi and its environs, according to the EFCC’s spokesperson, Wilson Uwujaren, in a statement on Tuesday.

The statement read: “The Makurdi Zonal Office of the EFCC on May 1, 2021, arrested four members of a syndicate of internet fraudsters in Makurdi, Benue State“.