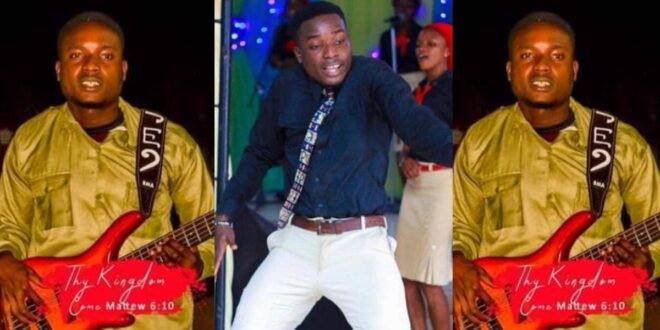 Sad! Young guitarist slumps and d!es while dancing and performing in church – Photos

As dancing and singing happily in church, a young Nigerian guitarist took his final trip to heaven.

The Godfrey Okoye University Enugu and Federal University of Technology Akure (FUTA) graduate died on Sunday, May 2, according to Facebook user Jackson, who posted pictures of the young man on his website.

Jerry was a member of the Redeemed Christian Church of God, according to photos on his Facebook profile (RCCG).

Jerry laid down at the altar for the prayer session, according to Jackson, after practicing the guitar like he had never played before.

Except for the dead, everybody stood up after the session. They lifted him only to discover that he was no longer alive.

“He wasn’t sick. His mum said he has gone to be with the lord that God has called him, that he died on the altar while worshipping God, that the way he played yesterday(The Bass Guitar) he has never played like that before that he Knelt down worshipping and later lay down till after the worship everyone was up but he was still there before they came to raise him up and found out he’s gone 2 rest with the Lord. RIP bro Jay Ray Maya aka E-Major. 4ever in my mind.” he wrote.

Beckley Marokuty Miles, a neighbor, said, however, that the young man’slumped’ and died in church.

Jerry, he said, was a devout Christian who led a life deserving of imitation.

“He slumped and died in church. Jerry was such an upright Christian who lived a life worthy of emulation. I want to quickly remind us of the scripture that says…we should not mourn like the people of the world when a believer dies. Jerry has gone to be with the Lord.” he said.

See also  "I don't want anything to do with Poloo again, her mother cried to me so i have redrawn the case from police"- DKB