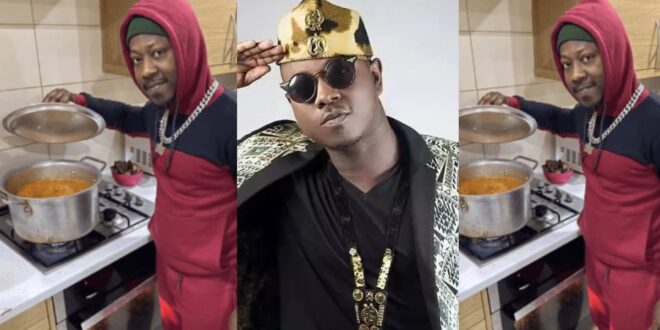 Sad: Flowking Stone’s music career is dead as he works as a cook in UK – Video

Given how he has been treated by award houses, especially Charterhouse, it is not unreasonable to believe that rapper Flowking Stone would hang up his microphone.

And the fact is, while Flowking Stone is undeniably a talented rapper, he does not seem to be destined for success in the realm of prizes, as shown by the VGMA archives.

But, as of right now, Flowking Stone is nowhere to be found, and his fans do not remember the last time they heard a song from his camp, which is unfortunate.

Yet, based on his comments on ABN Radio One’s “For The Culture” show on Sunday, May 2, 2021, it appears that DJ Slim knows a lot about Flowking Stone’s hideouts.

However according DJ Slim, Flowking Stone’s music career is actually being harmed by Rural-Urban Migration, which is one of the topics being discussed by JHS students, and the rapper is prepaying and opening soups in the United Kingdom.

Which is to say, Flowking Stone has briefly hung up his microphone and is now roaming the lands of the United Kingdom in search of his everyday bread. Maybe music did not benefit him all that much in Ghana.