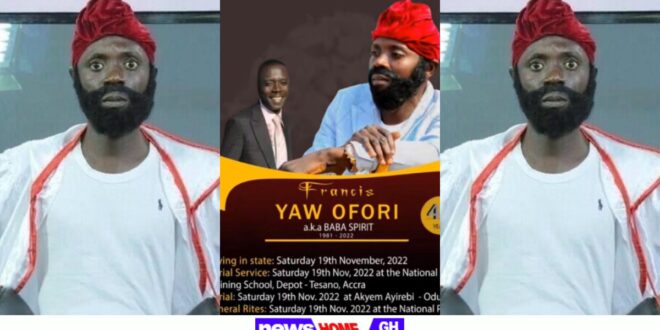 Prior to his funeral today, November 19, his family produced a burial poster that revealed the comic Baba Spirit’s true identity.

The late comedian, who went by Francis Yaw Ofori in private, will be buried at Depot-Tesano National Police Training School.

In the Eastern Region, in Akyem Ayirebi Odumasi, the final funeral rites will be performed.

The Accra CAC Obeyeyie district will host the thanksgiving service on Sunday.

This happened a few weeks after hundreds of mourners and supporters filled the Arts Centre Accra on September 25 for his seven-day memorial service.

His father and five siblings are still alive.

Along with the details, his poster also featured a picture of his “true self.”

Baba falsely identified himself as a Northerner with a bushy beard before his death, yet his images showed the exact reverse.

He had a dapper appearance and a refined demeanor.