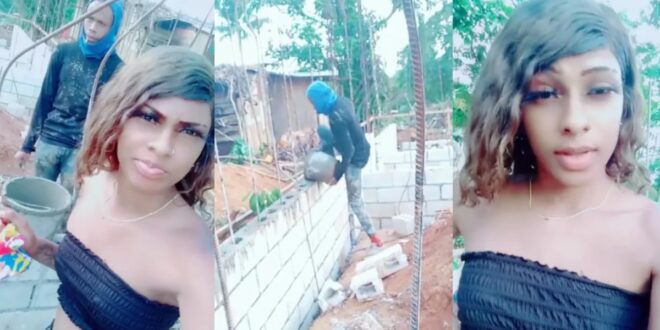 A lovely lady has shown off her mason boyfriend to the rest of the world in a recent pattern in which women are encouraged to brag about their partners and express their pride in them.

The lady was seen standing at a construction site and recording someone working in a video obtained by Newshomegh.com.

The lady was saying that the construction worker who was busy doing his job was her lover, according to the voice in the background.

She had no qualms in flaunting her guy and even displaying the kind of work he was doing for everyone to see.

The attractive young lady declared that the hardworking man was her man and that she would stand by him no matter what.

The young man was preoccupied with his job and paying no attention to his girlfriend whilst the video was being filmed.

He seemed to have been tricked into standing and revealing his face to the camera just momentarily at the start of the film.

The video’s caption questioned whether other women should proudly flaunt their boyfriends regardless of their profession.