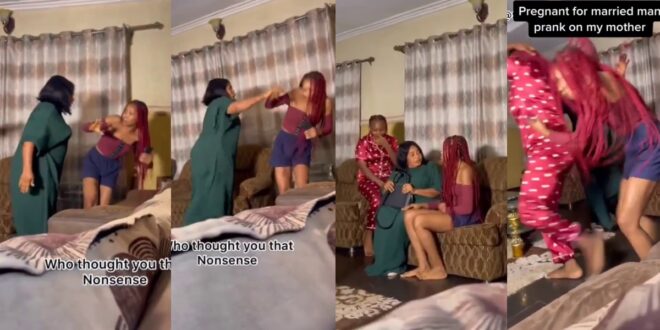 Two Nigerian sisters perpetrated a dangerous joke on their mother by saying that one of them had been impregnated by a man.

The young lady’s mother assumed the kid belonged to her boyfriend, Peter, but she later revealed that the man in question is married with two children.

In a video shared online, the mother goes into a frenzy after learning that her daughter’s ‘baby daddy’ is someone’s husband and begins beating her.

When the sister tried to calm down their mother, she shifted her rage to her and jumped on both of them.

She questioned the girl about who convinced her that it was acceptable to be with a married man and even become pregnant for him.

She screamed at them and attacked them with items, and in the heat of the moment, they revealed that it was all a prank.