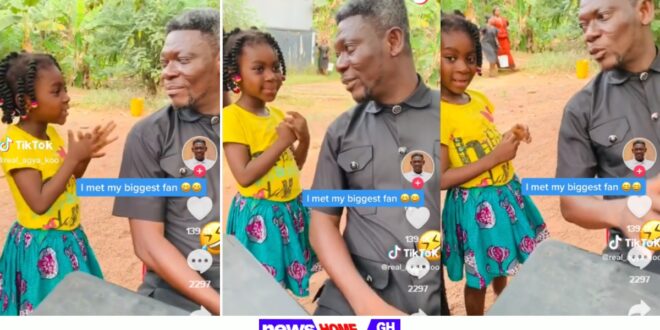 Kofi Adu, commonly known as Agya Koo, made people laugh on social media after a girl young enough to be his granddaughter approached him and asked him a humorous question.

The small girl was perplexed about the fact that she doesn’t see the veteran actor in films that are aired on television of late.

She was irritated and questioned the actor why she couldn’t see him as usual within the TV screen. Her amusing question made the actor smile broadly.

Agya claimed that he had to leave the TV set that day since he had to attend a funeral. But he assured her that she would soon see him on the TV, where he takes his showers, sleeps, and eats.

The small girl nodded in accord as she was pleased with the actor’s response. People thought the dialogue between Agya and the little girl was nice and left fascinating comments.