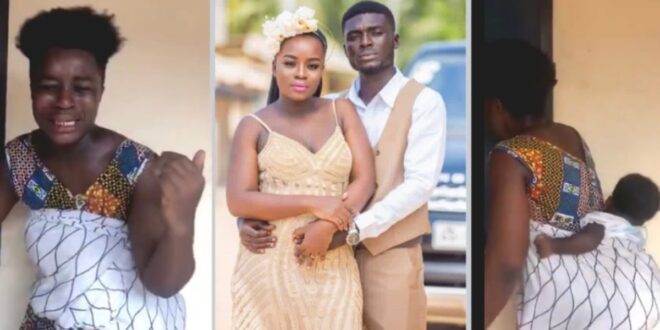 photo of the former Wesley Girls student’s husband calling for justice after he allegedly abused her has surfaced online.

Mr. Stephen Adu, the spouse of a former Wesley Girls Senior High School classmate, has been photographed pleading for revenge after he reportedly abused her.

we already reported on the mother of two, who is also a graduate of the University of Cape Coast (UCC) and Wesley Girls, being caught on tape crying uncontrollably and alleging that her husband had abused her.

The woman reveals that she has been married to Stephen Adu, who comes from a wealthy background, for less than two years.

”I have only been married for around two years. Stephen Adu is my spouse… His family is well-to-do. This is what he did to me. With him, I have two children. “I do not have the funds for a lawyer because I come from a poor family,” she cried.

She claims that she is financially dependent on her spouse and he does not allow her to function.

She pleaded with human rights organizations and other powerful agencies to support her because she is weak and in distress. To see the entire footage, click here.

we came across a rumored love photo of the woman and her husband.

They were dressed up for what seemed to be a wedding service or a function that the divorced pair attended.

The following is an alleged photo of a guy called Stephen Adu: