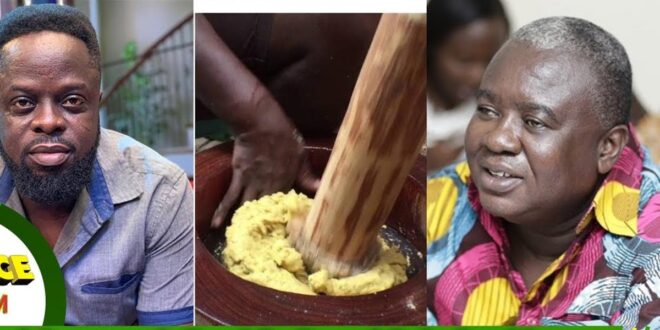 “Ofori Amposah use to pound fufu for me”- Fred Kyei Mensah

Fred Kyei Mensah, better known as Fredyma, a veteran Ghanaian music producer, has responded to reports that Strongman was pounding Fufu for Sarkodie during his time at Sarkcess Music.

Mr Kyei Mensah did not see anything wrong with an apprentice serving his or her “boss” during a conversation with Kwasi Aboagye on Peace FM’s “Entertainment Review” program, which was monitored by Zionfelix.net.

He listed a few well-known musicians who used to play fufu for him.

Ofori Amponsah and Kofi B, Fredyma recalled, used to pound fufu for him.

He does not think it is a big deal.

He went on to say that As someone he considers as a father, Ofori could not sit down for him [Fredyma] to pound fufu.

These people would also eat some of the fufu when it is finished, according to the knowledgeable music maker.

In the video below, you can see him make his claim.