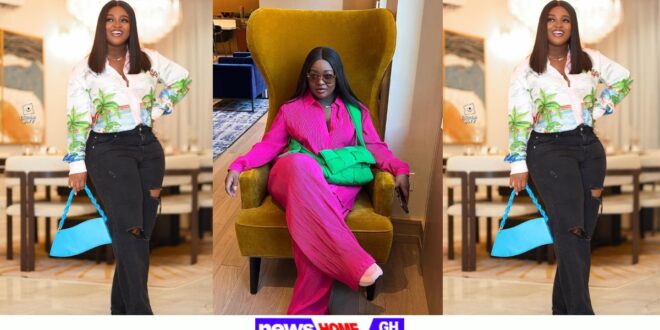 After uploading a selfie of herself on social media wearing a Casablanca shirt that cost GHc 12,640, Jackie Appiah, who is an actress and property developer, has become the subject of much conversation online.

Jackie was spotted wearing a Casablanca shirt in these slay pictures that are swiftly going viral. The shirt has a price tag of more than GHC12,640.

The actress wore subtle makeup, and her hair was jet-black and glossy. She posed for the picture while clutching one of her designer bag collections, which went perfectly with the outfit she was wearing.

The comments that have been left below the photographs are appalling and are full of insu!ts directed at the actress.

According to these individuals, Jackie Appiah would have been able to help a great number of people with the money that she spent on a single shirt rather than utilizing it to make people jealous.

Some of Jackie’s detractors even suggested that she may have given the money to some of her followers who were unemployed so that they could use it to start their own businesses.

The following are some of the outrageous comments received by the actress: