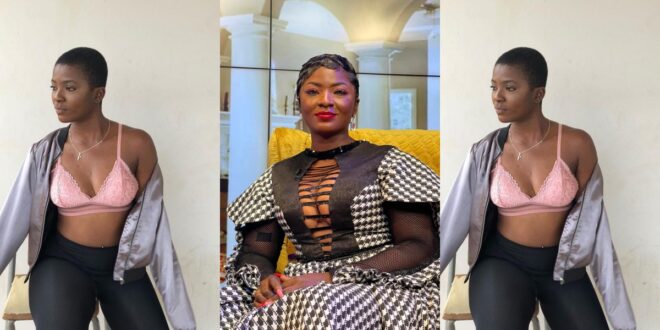 The Ghanaian actress Priscilla Opoku Agyeman, also known as Ahouf3 Patri, just had some new images released of her on the official social media accounts of United Television. As a result, a lot of internet users have been discussing the new photos.

She was a panelist on the iconic United Showbiz entertainment review show, which aired every Saturday, November 19, 2022.

Ahouf3 Patri was dressed to the nines in a sophisticated white and black ensemble that allowed her to display her ample cleavage.

Her characteristic short hairdo was another element of her appearance that could not be overlooked in any way.

The fact that she decided to put her cleavage on display during a program that was broadcast live on television made a lot of internet users quite unhappy, despite the fact that she appeared to be very attractive.

A significant number of the individuals who left comments on the photo questioned her reasons for uploading photos with such content.

Others attacked Ahouf3 Patri for wearing an excessive amount of makeup, which, in their opinion, made her look considerably older than her very stunning and youthful personality.

One commenter by the name of Dorothy Wi-Afedzi wrote:

Did she dress like this to appear on utv for a program? If yes,then the station should be concern about what people wear on air, since people watch globally.’

Another person who goes by the name Millicent Korkor also wrote

You’re very beautiful without makeup. Initially, I thought it was Destiny Etiko. This makeup doesn’t look good on you.’

Look down below for some more comments and pictures…