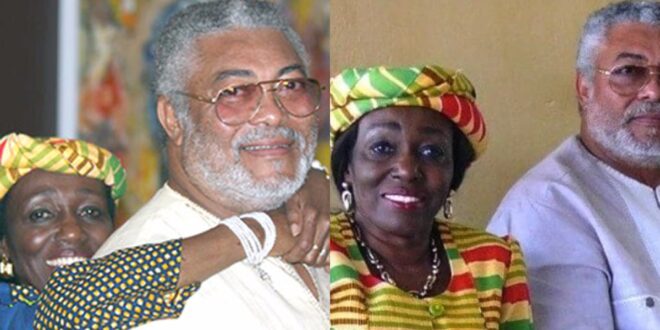 Three months after the death of her spouse, Jerry John Rawlings, Nana Konadu Agyemang Rawlings has finally found her voice.

Her voice was heard after the Musician Union of Ghana (MUSIGA) granted her permission to speak at a virtual concert in honor of the late former President.

Mrs Agyemang Rawlings, who admitted that life had not been simple, thanked Ghanaians for their kindness and affection, which she said had made things easier for her and her family to live.
She also expressed gratitude to the Akufo-Addo-led government for its position in ensuring Mr Rawlings’ proper burial.

Her heartfelt gratitude goes to MUSIGA for remembering that her late husband was really dedicated to the music business, with whom he had a strong working friendship.

She explained why Mr Rawlings was so passionate about the entertainment business, saying that he felt that for a nation to prosper economically, industries like leisure, culture, and music should not be ignored.

She was particularly enthusiastic about the concert, which she defined as proof that her husband’s legacy lives on.