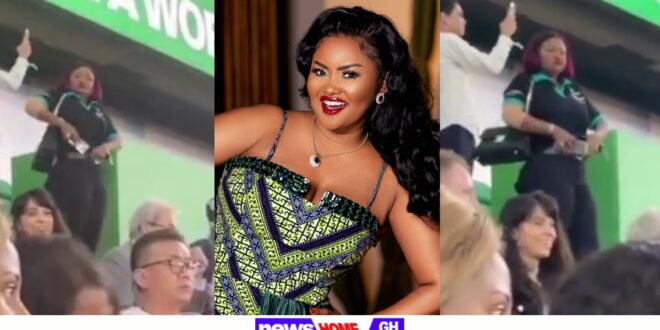 During Ghana’s World Cup game against South Korea in Qatar, actress Nana Ama McBrown was caught on camera trying to keep her phone from going missing.

When referee Anthony Taylor added 10 minutes to the customary stoppage time, there was a frenzy in the arena.

Many football fans, primarily Ghanaians, were left on the edge of their seats as the final whistle blew in the 3-2 thriller, fearing the Koreans would level in the last minutes.

The TV show host couldn’t keep her buttocks on her seat and appeared agitated until the last whistle rang over the stadium.

At a point, McBrown is seen tucking her phone in her pants in a video shot by Okyeame Quophi, who was also at the Education City Stadium.

Followers of the actress were in stitches as they couldn’t believe the affluent actress and TV presenter was concerned about her pricey phone.