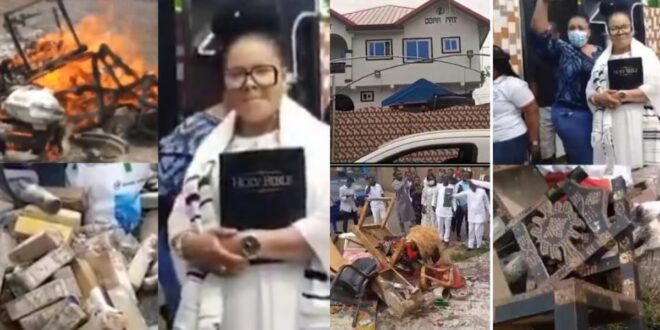 Nana Agradaa Stopped pastors from burning 3 of her gods, she explains why in this video.

As Nana Agradaa set fire to her gods after repenting and following Christ, she failed to burn three of her most important deities.

Things such as wood carvings, stools, and other fetish regalia were taken out and set on fire, as previously mentioned.

Pastor Joseph Kwadwo Kyere of the Truthful Word Ministry, who is regarded as Agradaa’s spiritual father, led the exercise.

However, not all of the deities discovered in the temple of the infamous priestess turned evangelist were burnt.

According to a post on Graphic.com.gh, several of the deities and other fetish objects were removed until Pastor Kyere set them on fire.

Although some of the objects he removed were placed in the trunk of a neighboring vehicle, others were returned to the shrine.

Three idols, one gold-colored stool, and two wooden carvings, one of which had an imitation human-like face and hair, were claimed to have been taken out of the lot that were burned.

Agradaa explains why the three deities and other objects were removed in a video on the Thunder TV YouTube channel.

Those deities, she claims, were not purchased by her but rather borrowed from other fetish priests around the world.

Since the deities were not for her, it was only right that they be recalled, and she should not have let them be burned.