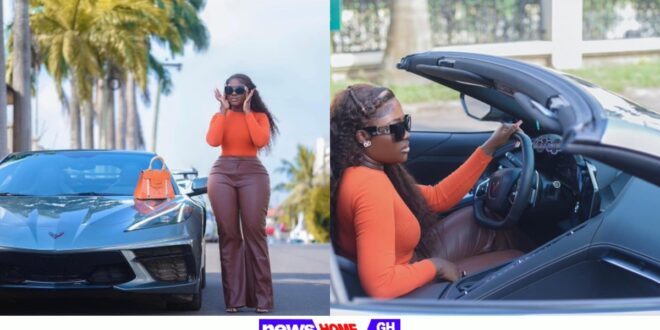 Fella Makafui has reportedly added a new vehicle to her fleet of pricey vehicles. It is thought that her husband, Medikal paid for the new vehicle as compensation.

Just two weeks ago, online rumors that went viral stated that the couple was thinking about getting a divorce.

Reports say that even though Medikal has been caught cheating on Fella Makafui more than once, he hasn’t stopped. Also, it was said that Fella Makafui’s plan for a divorce was violently turned down by the two mothers of the power couple.

Fella and Medikal slung shade at each other through a series of online remarks, and as the dots started to connect, Fella accused Medikal of adultery while the musician criticized the wife for being disobedient.

The fight seems to be over, and Medikal is said to have made up for it by giving Fella a brand-new convertible Chevrolet Corvette.

happy and content Fella posted images of her new vehicle on social media.

Fella claims that her husband’s new purported gift is worth the hassle she has had to put up with for the past two weeks.