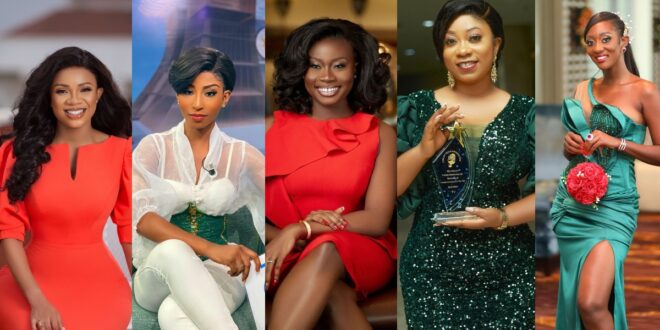 GhOne TV, a division of the Excellence in Broadcasting Network (EIB), appears to have some of the most attractive women on-screen.

GhOne TV has a reputation for putting very attractive people in front of the camera to host a series of television shows.

Given their most recent inclusion, Natalie Fort, who joined the team after leaving TV3, Newshomegh.com has agreed to compile a list of 10 GhOne presenters
Following her departure from Media General’s TV3, Natalie has joined the GhOne family.

Lovely and evergreen Serwaa Amihere is a well-known face on Ghanaian television. She also anchored a number of shows, including the early morning show GhToday and some of the equal importance.

Lilly was a newsreader at Metro Tv before she recently joined GhOne television.
She continues to deliver the news on GhOne TV and hosts The Life Show. She is absolutely stunning.

Regina is a lovely, funny young lady who has graced the screens of GhOne Television for a number of years. She is the presenter of the Rhythmz and Unwinds shows.

Since she knows French too well, we call her the French Madma. One of the new additions to GhOne TV is Ohemaa.

On the Duvet show, Miss Nancy, the style coach, adds a dash of excitement to couples’ quests to create perfect relationships. She is a fantastic host who goes beyond and beyond to fulfill her role.

See also  "I will not encourage my children to read the Bible, they will read a novel instead"- Captain smart

Mimi is also a Toast co-host.

9. Nana Aba Anamoah is renowned broadcaster and she is currently the acting manager of the EIB Network.