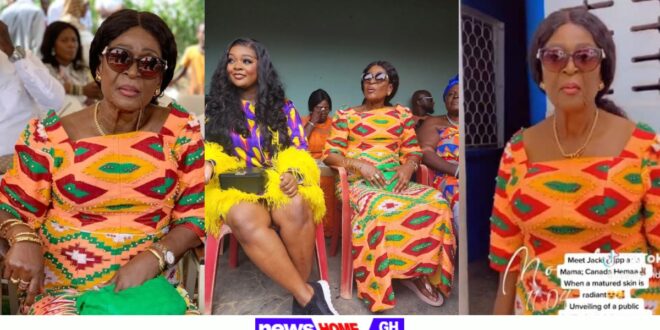 After a photo of Jackie’s mother appeared on social media, fans mocked Afia Schwarzenegger for not having the looks.

Some social media users believe Jackie’s mother is more beautiful and looks younger than Afia Schwarzenegger, although the former is years older than the comedian.

Jackie Appiah’s mother accompanied her to Ejisu in the Ashanti Region, where the actress celebrated her 39th birthday.

As she does every year, the actress made a large donation in her hometown of Ashanti Region. Jackie Appiah is said to have donated a fully furnished ultra-modern toilet facility to her hometown

Jackie Appiah’s lovely mother was among those who stormed the Ashanti Region in order to bless the township with a modern toilet facility and other valuables.

The celebrity mom is currently trending because people on social media are all over how she looks. The controversial Afia Schwar is also trendy because people are making comparisons between her and Jackie’s mother.