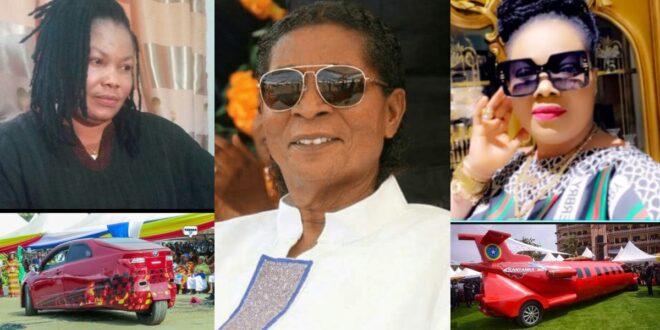 there has been a serious beef between the self-acclaimed queen of Comedy Afia Schwarzenegger, Mona Gucci a hostess on Kantanka TV, and the owner of the TV Apostle Kwadwo Safo Kantanka.

Nana Agradaa who sees herself invited into any trending beef has taken to her TV station, Thunder TV to talk about the issue.

according to the self-acclaimed money ritualist, if Kantanka shouldn’t think he is god because of the toy cars he has been manufacturing.

she further went ahead and dared Kantanka that if he has power as he claims he has he should deal with Afia Schwarzenegger for everyone to see.

the beef between Schwar and Mona Gucci started a few weeks ago where Afia dragged Mona in the mud and drug her boss Kantanka as well.

from Afia Schwarzenegger, Kantanka gave his employee, Mona Gucci the permission to invite Mzbel, Nana Tornado, Akuapem Poloo, and some other people to sit on their TV station and insult her father.

it could be recalled that Mzbel and Tornado sat on Mona Gucci’s show on Kantanka TV and tore Schwarzenegger apart and included her father and her children, likewise Akuapem Poloo who also spoke ill about Schwarzenegger on the same show.

well, to the mother of twins, there is no way she will keep mute for the above-menstioned people disrespect her family most especially her innocent father.

Schwarzenegger explained that she is attacking Kantanka because during that show she called to talk to him so they can stop the show and stop tarnishing the image of her father but he wasn’t willing to speak to her hence she will never leave him out when she is attacking Mona Gucci.

See also  Ghanaians sympathized with Dede Ayew after his daughter was rushed to the hospital following his penalty miss.

well, Nana Agradaa has currently joined and she is daring Kantanka to attack Afia Schwarzenegger if he thinks he is god.