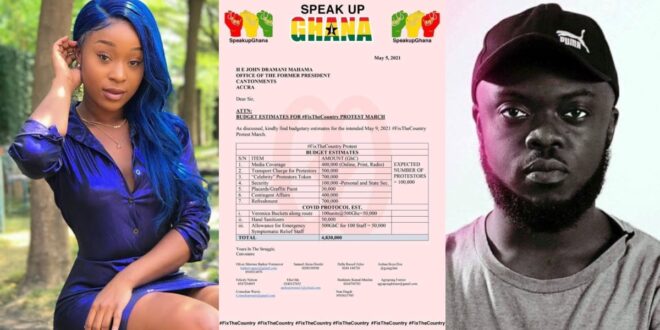 Efia Odo has clashed with Youtuber Kwadwo Sheldon over a document claiming former President Mahama is supporting the #FixTheCountry protestors.

Kwadwo Sheldon had previously posted a tweet from Yaw Abban, an NPP communicator, in which the two put forward figures implying Mahama was behind the rally.

Kwadwo Sheldon, according to Efia Odo, who has been at the forefront of the whole #FixTheCountry campaign, has been working hard to sabotage their attempts and make all they have been fighting for pointless.

Efia Odo and Kalyjay have stated that the movement they are launching is for the good of the country, not to boost the popularity of the opposition party.

“We are working our ass off and all you can do is create distractions. To defame our names just because we want the country to move forward? What kind of human being are you?? Kwadwo Sheldon you’re a disappointment, smh. Stop circulating that fake document!”

“Kwadwo Sheldon, that fraudulent document you just pulled out your ass is wack. I actually thought you was a real one but you’re fake and easily bought! You’re cheap and I’ve lost any respect I’ve had for you! Why would you set an Agenda like this?? How much are they paying you??”

“I repeat this is NOT FROM US!!! Sheldon don’t fuck around. How much are they paying you for this. Where’s Mahamas signature??? Get the fuck outta here! I can pay for this shit outta cash! No one needs no help over here!!” Efia Odo wrote.

As a result, Kwadwo Sheldon’s tweet evidently irritated the socialite, who responded with the following.