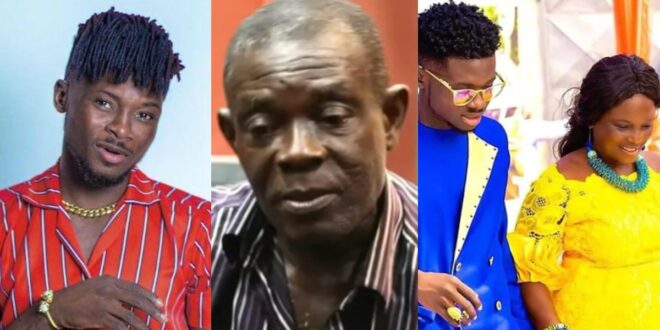 Kuami Eugene, a Ghanaian musician, has finally responded to claims made by one Kofi Boakye that he is his father.

Kuami Eugene said he does not know the guy from Adam in an exclusive interview with Newshomegh.com.

When word got out that Boakye was his father and that he had forgotten him, he was saddened, according to him.

He revealed that he has lived with his mother and father since he was a teenager, and that the media is focusing on anyone he does not know who claims to be his father.

Kuami Eugene also characterized the situation as an embarrassment to his parents, stating that the media and those circulating the rumor are unconcerned with how they would feel.

He went on to say that the guy keeps making such statements that other people might be pushing him to do so, as the media continues to give him a voice to express his opinions.

The alleged Kofi Boakye was recently in the headlines, alleging that the musician’s name is Kofi, not Kwame, and that he called his “baby” after him.

Kuami Eugene’s mother, he claims, absconded with him to Accra when he was a child and they lived in Oda.

He claimed that he had told the musician’s mother that he was leaving for greener pastures in a nearby town, only to return to find them gone.

Boakye made headlines recently when he said that despite his best efforts to contact his “son,” Kuami Eugene continued to ignore him and would not even return his calls.

See also  "I will not encourage my children to read the Bible, they will read a novel instead"- Captain smart

He complained that this was causing him to have elevated blood pressure. The man listed Kuami Eugene’s “true date of birth” in an earlier article by Newshomegh.com.

However, according to the musician, Kofi Boakye is not his father.