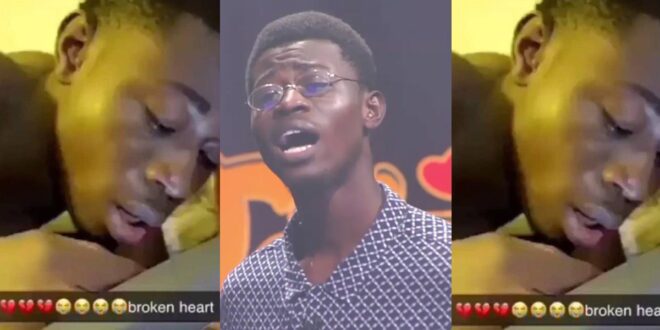 Sammy, of Nana Ama’s broken heart fame, and a Kwame Nkrumah University of Science and Technology (KNUST) grad, has participated in the TV3 Date Rush show.

After Nana Ama left him about a year ago, he went on the hunt for another girlfriend.

Sammy had the show off to a decent start when all ten ladies turned on their lights for him to show that they were interested in him.

However, after explaining why Nana Ama left in the second round, Sammy only had three lights left.

Nana Ama, he claims, left because he kissed another girl, who then spread the news across campus.

The most difficult part, according to Sammy, was when some of his own friends stabbed him in the back by asking Nana Ama, which resulted in the split.

Fortunately, one of the contestants, Ruth, was able to rescue Sammy.

He sadly switched off Ruth’s light and confirmed that he had no feelings for her.

He clarified that Ruth seems to be older than he is, which might lead people to believe she is his mother if they go for a walk in town.

He was apparently eyeing Bibi, another contestant on the programme, but she was uninterested in him as well.

Sammy finally lost Ruth, who had disappointment written all over her face after Sammy refused her despite her claiming to be just 23 years old.

Maybe love is not for Sammy, and he will have to concentrate on other things before the right time comes for him to find his own love.