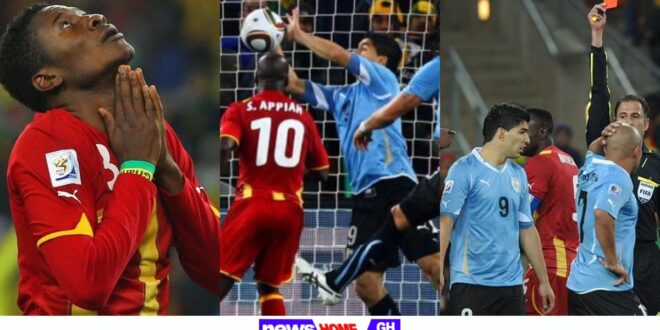 “I will not apologize to Ghana, Gyan missed the penalty I was punished with a red card”- Suarez

Luis Suarez has stated that he does not regret the premeditated handball that he committed in 2010, which prevented Ghana from advancing to the semifinals of the World Cup. The two teams will meet again in Qatar in 2022.

In the final minute of extra time in the 2010 quarter-final, the forward, was awarded a straight red card for blocking Dominic Adiyiah’s goal-bound header with his hands.

As the score stood at 1-1, Ghana was given a penalty to try to win the game, but Asamoah Gyan’s spot kick hit the bar, and Uruguay went on to win the game 4-2 on penalties.

The incident was one of the most contentious in the history of the World Cup, and it cost Ghana the opportunity to become the first country from Africa to go to the semifinals of the championship.

Twelve years later, Uruguay and Ghana will face each other in the group stages of the competition on Friday. The winner of this match will eliminate the loser.

On Thursday, during a pre-match press conference in Doha, a journalist shared with the Suarez the opinion of some members of the Ghanaian public, who view him as “the devil himself,” and say they anticipate his retirement with excitement.

However, in response to this, he stated that he was not to blame for Ghana’s loss in the game that took place in 2010.

“I don’t apologize for that, I did the handball, but the Ghana player missed the penalty, not me. I could apologise if I injured a player with a tackle and got a red card, but in this situation I take a red card and the referee says penalty.

“It’s not my fault, I didn’t miss the penalty. The player who missed the penalty said he would do the same [as I did] in that situation. It’s not my responsibility in this situation.”