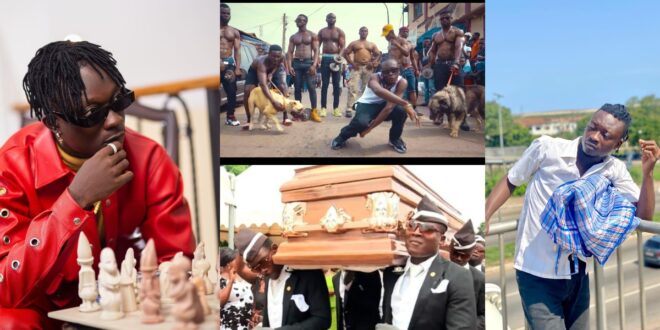 “I use to carry dead bodies to fend for myself, I also worked as a watchman”- Ekorso hitmaker Kofi Jamar

Ghanaian rapper Kofi Jamar has shared an emotional tale about his journey to the top and how he used to care for himself by working as a pallbearer.

His first paid job, he claims, required him to serve as a pallbearer. He was compensated for carrying, dressing, and transporting the deceased.

Opening up on how he had to serve in a variety of fields on his way to the top, Kofi Jamar admitted that the beginning was difficult for him and that he had no other choice than to accept everything life had to give him.

In an exclusive interview with Delay, Kofi Jamar said that after serving as a pallbearer for a while, he went on to serve as a security guard for two hotels in Kumasi.

Kofi Jamar is one of Ghana’s most promising young rap artists. On major music streaming sites, his hit single “Ekorso” is performing well, and his popularity is starting to resonate with many music lovers.

But keep in mind that Kofi Jamar has been through a lot, but his personal desire to excel, along with his unique abilities, has gotten him this far.