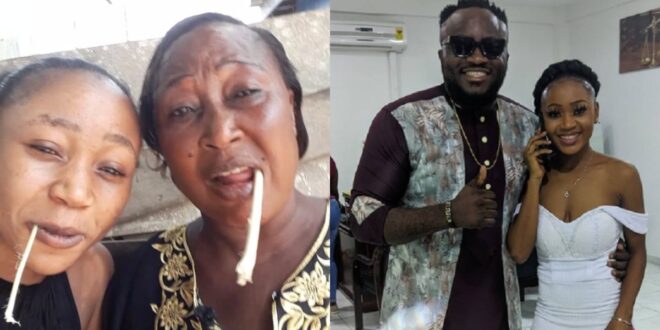 “I don’t want anything to do with Poloo again, her mother cried to me so i have redrawn the case from police”- DKB

Following her latest outbursts against him defrauding her of 4000 Cedis, Ghanaian comedian Derrick Kobina Bonney has reportedly ended his relationship with his former “bestie” and supposed girlfriend Akuapem Poloo.

Akuapem Poloo organized a press conference a few days after successfully avoiding prison, where she apologised to the public and promised never to share any nude pictures of herself or her son on social media.

When she was already applying for a potential parole, her bestie, DKB, took it upon himself to collect money to support her stay financially secure after she was released so she could provide for her mother and her 8-year-old baby.

Anyway, Akuapem Poloo, who is notorious for causing controversies, used her Instagram page to defame DKB, accusing him of squandering all of the money that had been sent to her. In the now-deleted footage, Akuapem Poloo claimed emphatically that a woman named Maa Alice had given him DKB 4000 Cedis to be sent to her, but he squandered it.

DKB retaliated by reporting her to the police and filing a defamation lawsuit against her. DKB has now agreed to withdraw the case against Akuapem Poloo after many pleadings and tears from her mother.

He made it plain, though, that he no longer has anything to do with Akuapem Poloo, and he also blocked her from all of his social networking accounts so she could not contact him.

See the video below to learn more.