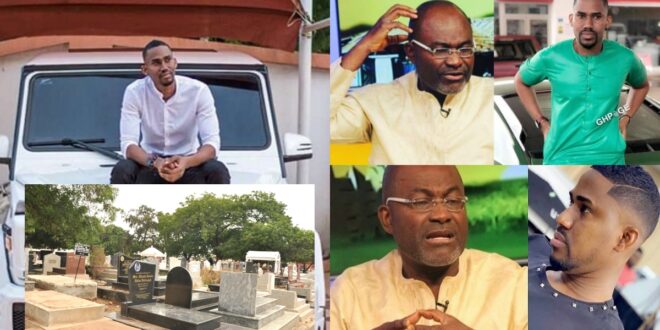 “I caught Kennedy Agyapong at the cemetery at 2:00 am”- Ibrah One

we previously posted on Ibrahim Daouda, also identified as Ibrah One, using his Instagram stories to reveal that certain bad guys in the world will be revealed shortly.

Ibrah One took advantage of the opportunity to encourage John Dramani Mahama to remain calm and observe what is happening in the country. According to Ibrah One, the nation will call John Mahama back to lead the government.

Here is what he said:

”Mahama should just sit down and watch what will start to happen from Monday, all the evil doer’s will be exposed.. And the opposing party will call him back his chair cos it doesn’t belong to them.. There’ll be serious deaths and accidents which will happen starting from Monday.#Ibrahone”

In a recent post seen by our team, Ibrah One claims to have seen the Hon. Member of Parliament for Assin Central, Kennedy Akompreko Agyapong, at the cemetery and that he took a photo of him.

Ibrah One did not reveal what the Hon. MP was up to at that ungodly hour, nor did he reveal what he was doing at the cemetery at the moment. He also said that every night before going to bed, Hon. Kennedy Akompreko Agyapong consumes human blood.

”I have caught Kennedy Agyapong at the cemetery around 2:30am, I even took a picture of him.. I dare him to come out and denied.. All the evil that politicians in Ghana do is coming to an end.. Ghanaians see them on tv pretending to be good people.. All they do is to deal in human part. Kennedy drinks human blood every night before he sleeps.. Rev Obofour will bring out some of the gist.#Ibrahone”