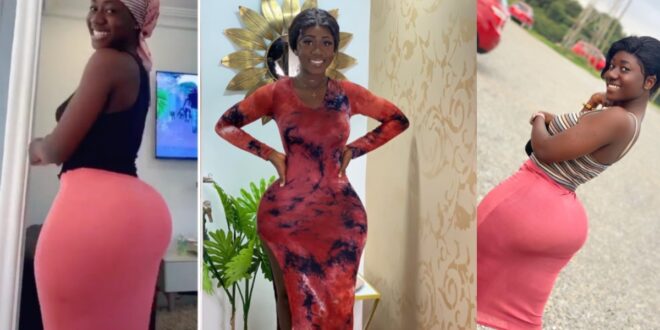 Many men are crushing on internet sensation Hajia Bintu because of her beauty and huge backside.

well, to all the guys who are eyeing her and flooded in her DM, Hajia Bintu has finally revealed her type of man.

the video as we sighted shows the type of men she is interested in, her favorite s3x position, and if you find yourself not qualifying count yourself out..lol.

meaning all shot guys crushing and flooding her DM with messages should stop since they have already been disqualified.

Hajia Bintu further says that the tall guy she wants also has be to dark and not fair just as she is dark-skinned, just to match up to her color.

she also claimed with this same guy when choosing to be with him with money or love, Hajia Bintu says she will be with such guy if only he has money, no broke guys.

the shocking part is, the Tik Tok sensation having a soft nyash undoubtedly revealed that her favorite s3x position is ‘doggie’, can u imagine!

all those guys who qualify to be Haija Bintu’s lover please make sure you are good in ‘doggie’ style since it also makes the princesses happy.

she disclosed all this in a preference challenge on Tik Tok and guess what fans are somewhat shocked.

meanwhile, she won an award on Tik Tok for being a massive influence on the popular entertainment app.