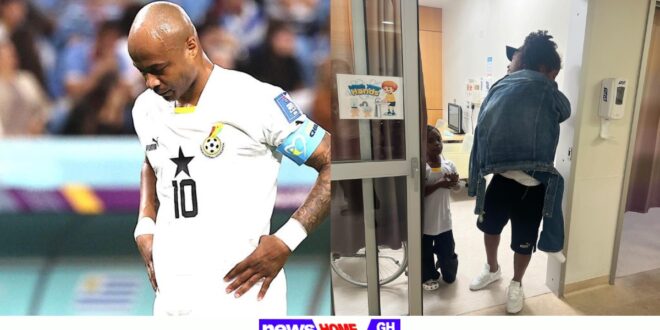 Ghanaians sympathized with Dede Ayew after his daughter was rushed to the hospital following his penalty miss.

Yvonne Ayew, the wife of Black Stars captain Dede Ayew, has disclosed that their daughter was sick when her husband was playing for the Black Stars.

According to her, Dede had to forego being with his sick daughter in order to play for the Black Stars out of love for the country and to fulfill his position as a leader.

Yvonne Ayew wrote a lengthy piece about the sacrifices Dede Ayew had to make as a father and a footballer. She also praised him for always doing his best to balance the two responsibilities to the best of his ability.

Dede Ayew reportedly had to travel to the Sidra Medical and Research Center Hospital following the match to check on his daughter. In a photo shared by his wife, the Blackstar’s captain is seen carrying his sick daughter on his shoulders after visiting her at the hospital.

Fans who understand Yvonne Ayew’s French have flooded her page in response to her post, wishing her daughter a swift recovery.