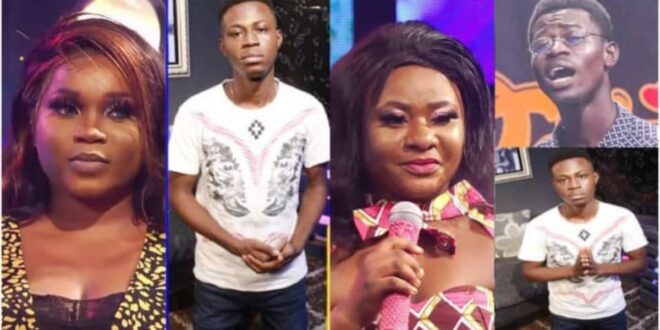 #DateRush: Sammy goes down on his knees to Apologize to Ruth for saying she is old to be his mother (video)

In an interview with Abena Gold on GHPage TV, Sammy of Nana Ama broken heart fame and a final year student at Kwame Nkrumah University of Ghana (KNUST) apologized to Ruth for portraying her as old looking on TV3’s Date Rush show.

He also went down on his knees to beg her forgiveness for portraying her as someone who could be mistaken for his mother when they went out on a date.

Most people on social media believed that it was unpalatable and unnecessary.

But, as Sammy explained in an interview with GHPage, he was confused by her makeup and the various lighting on stage.

He claimed that it was not his intention to hurt her feelings when he said that.

Even when he saw her backstage, she did not seem to be as old as he had assumed she was on stage.

He encouraged Ruth, on the other hand, to come forward if she considered what he said about her offensive.

Sammy was a contestant on TV3’s love-finding show, Date Rush.

He set out on this journey after Nana Ama broke his heart, and he became the target of social media trolls and memes for days.

In the first round of the show, Sammy got lucky because all ten ladies left their lights on for him. It is a sign that they are curious about him and want to learn more about him.

However, by the second round, seven out of ten of the ladies had turned off their lights. That is, after he explains how he ended his relationship with Nana Ama.

Some of Sammy’s friends had told Nana Ama that he had kissed another woman, according to Sammy.

He said that he was inspired to kiss her because he was alone in a room with her watching movies.

Obviously, the response was not well received by the ladies.

Sammy almost walked off in the final round, but he got lucky when Ruth left her rush on for him.

Interestingly, he dimmed Ruth’s light and said that he has no feelings for her.

He clarified that Ruth seems to be older than he is, which might lead people to believe she is his mother if they go for a walk in town.

Ruth’s face was flushed with disappointment after Sammy turned her down despite her explanation that she was only 22 years old.

Sammy had his eye on Bibi, another contestant on the show, but she was uninterested in him as well.

Sammy declares himself to be 23 years old.