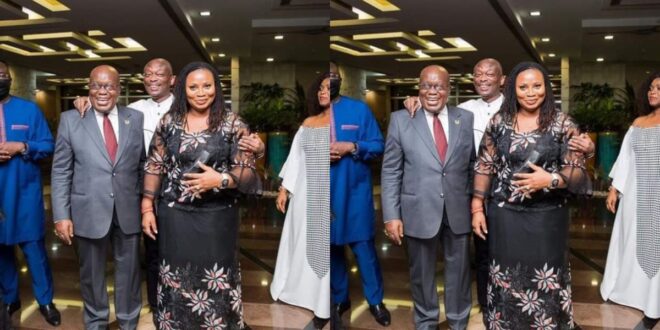 Charlotte Kesson-Smith Osei, a Ghanaian lawyer and former chairperson of the Electoral Commission of Ghana, has been spotted in a new picture with President Akufo Addo, both of whom are smiling.

Mrs Charlotte Osei was named Chairperson of the Electoral Commission in 2015, but she was fired by President Akufo-Addo in June 2018 due to financial mismanagement.

Her dismissal was based on the findings of a committee that looked into charges of corruption and wrongdoing against her.

Many people expected bad blood between her and Nana Addo Danquah Akufo-Addo after the manner in which she was fired, but the new photos show that there is still love between them.

Charlotte and Akufo Addo were seen exchanging pleasantries and taking a picture together in the photo.

They are pictured below.