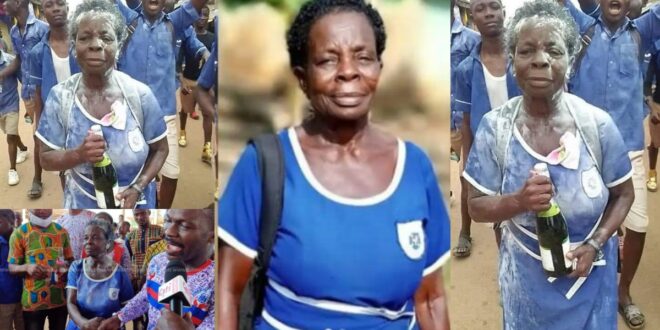 Remember the 60-year-old Elizabeth Yamoah who became the first oldest BECE candidate ever in Ghana?

well, months after the BECE came off, the West African Examination Council (WAEC) released the 2020 results last week, and unfortunately, the results of Madam Elizabeth have surfaced on the internet.

her determination to continue her education despite her age made her gain international recognition as she was featured on various international media platforms.

way back in October, the 60-year-old mother who wrote the BECE with thousands of children who can be her grandchildren told Ohemaa Woyeje what motivated her;

“I COULD NOT HAVE GOTTEN TO WHERE I AM NOW BUT WITH THE HELP OF NANA ADDO’S FREE EDUCATION, I HAVE BEEN ABLE TO CATCH UP AND STILL WANT TO CONTINUE WITH MY EDUCATION“

in one of her interviews, Madam Elizabeth revealed that it’s her dream to become a nurse hence she will continue SHS and tertiary to pursue her dreams.

photos of her full of powder while jubilating after completing JHS surfaced and made her an internet sensation.

being an internet sensation, her result has surfaced on the internet of which we know many people will be interested in seeing.