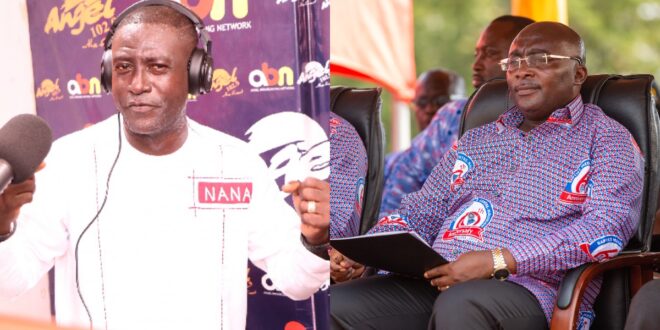 “Bawmia is the worst vice president in history”- Captain Smart

Captian Smart, a broadcaster, has renewed his assaults on the Vice President, claiming that he is incapable of managing Ghana’s economy.

According to Angel FM Journalist, Bawumia has failed miserably at rising Ghana’s economy, resulting in the country’s massive debts.

Captain Smart said on his radio show that he is disappointed in Vice President Bawumia for failing to walk the talk and demonstrate to Ghanaians why the NPP is the better option.

Captain Smart went on to say that although he was outspoken in his criticism of former President Mahama for unnecessary borrowing and ballooning Ghana’s debts, he is now astounded by the amount of borrowing the so-called “Prophet of Economics” has done with Ghana.

Captain Smart rantingly portrayed Bawumia as the most inept vice president in Ghana’s history, who has struggled to deliver on his promises and has sunk the country into massive debt.

Below is a video to watch: