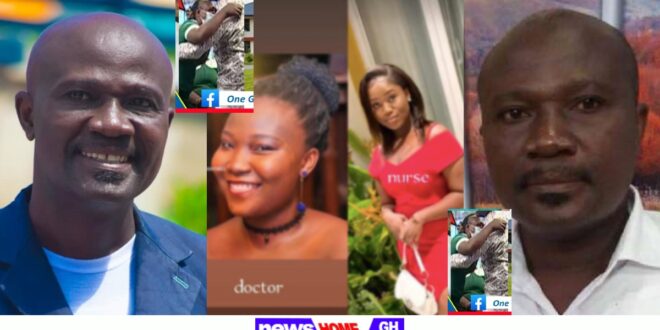 The Ashanti Regional Director of the NSS has been accused of disrespecting a nurse at the Manhyia Hospital because of how she talked to his daughter, who is also a doctor at the hospital.

The nurse had called the doctor to suggest a change in the prescription because the pharmacy didn’t have what she had written down, unfortunately, she took offence at how the nurse spoke with her.

By coincidence, the doctor’s father was present throughout her phone call with the nurse. The unexpected turn of events made Mr. Opoku-Mensah so angry that he took his daughter to the emergency room.

According to reports, Mr. Alex Opoku-Mensah stormed into the surgical ward of the hospital where his daughter works and verbally abused and threatened the nurse working there.

Alex Opoku-Mensah stormed the hospital with his daughter and hurled abuse at the nurse, asking why she would call her to report for work as a mere nurse.

Mr. Opoku-Mensah was quoted on a widely shared audio clip as saying; “you are very frustrated…Who born dog?…you envy her, you don’t respect. Are you a doctor? Who are you? Are you mad? Is the hospital yours? Stupid idiot.. that your useless nursing that you do, useless woman… Do you know who I am? I am the Regional Director of National Service Scheme. Some of you are under me.”

Since then, the Ghana Nurses and Midwives Association has published a statement demanding the immediate dismissal of the NSS regional director in Ashanti for the inappropriate behavior.

part of the statement reads: “The Public Services Commission and Government for that matter should sack the said Regional Director immediately because he is not fit for the director position he holds in public service.”

“He had absolutely no right to enter Manhyia hospital and verbally abuse and threaten the nurse in question who was on duty at the time,”