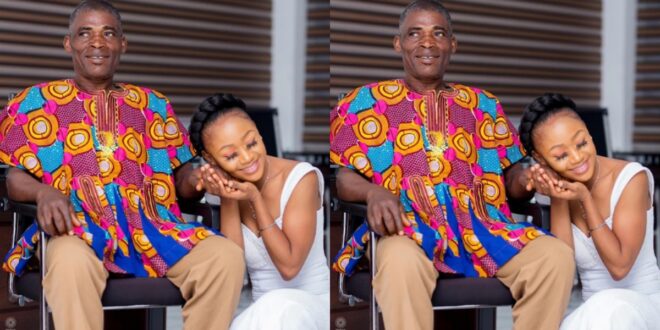 Akuapem Poloo, a Ghanaian actress, has debuted her father on social media for the first time. Akuapem Poloo’s father had been off social media and in secret before she publicly revealed him yesterday.

Her dad, unlike her mother, is a man of silence, according to her, which is why he has never appeared in any of her videos or been shown off to the public.

Akuapem Poloo is seen dressed in all white alongside her father with her head resting on his laps as she enjoys some quality bonding time with him in a photo shared on her Instagram page, while her father is dressed in an African print outfit and looks very youthful as he smiles.

She captioned the picture, “The one who brought me into this world, Mr ALADE DANIEL such a gentle person, he is a man of few words, very quiet may you live long daddy.”