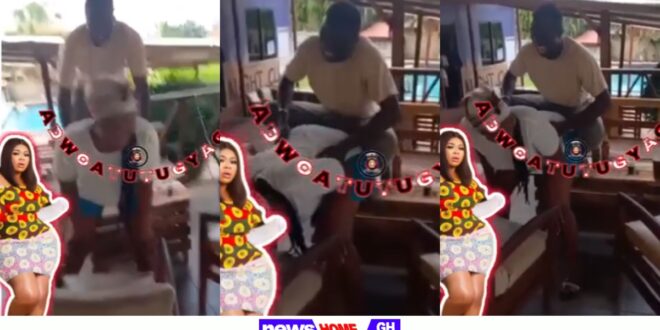 Ghanaian socialite Adu Safowaa has got a lot of netizens talking in a new video she took with Kumawood actor Kwaku Manu.

After appearing in a new video without her emphasized curves, the media celebrity appears to have perplexed several social media users.

Safowaa can be seen goofing around in a video with Kumawood star Kwaku Manu. The two characters are seen performing an exotic dance; Safowaa twerked while Kwaku Manu took care of her bottom and curves.

However, the video appears bizarre to social media viewers since Adu Safowaa appears radically different without the ornamented hips.

According to social media users, Safowaa’s curves had vanished in the video, despite the fact that she recently trended for suddenly sprouting huge butt and hips.

A woman who seemed more perplexed after watching the video wrote:

‘What has been happening to Her Hips and Ass I don’t get it ooo, You people shud tell me something, or do some people lose their hips and ass in certain times and regain it again🤷🏻‍♀️🤷🏻‍♀️🤷🏻‍♀️🤦🏼‍♀️💔💔confused 😕‘

Watch the video below.