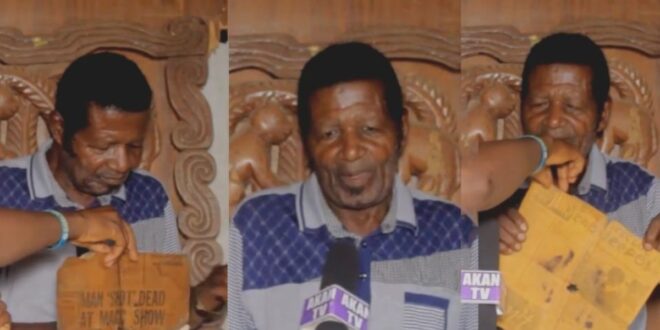 Professor Hindu has shown more light unto his heydays as a great spiritualist as he has made a lot of disturbing revelation about his activities those days.

When Akan TV visited him at his home in Assin Nyankomase in Ghana’s Central Region, the 83-year-old man talked about his past and his journey as one of the great spiritualists.

He claims he was born Kwadwo Addae, but when he began practicing magic at the age of seven, his name was changed to Professor Hindu.

The man pulled out photos of some of his performances in Europe when the legendary Fella Kuti took him there on a tour.

He described how he killed a man in Europe and resurrected him three days later.

His first botched effort occurred in Takoradi in 1967, when the man he killed could not resurrect, resulting in his court prosecution.

The legal case did not deter him from killing another man on April 3, 1968, and resurrecting him 11 days later, which helped him defend the case in court when his attorneys claimed that it was his job.