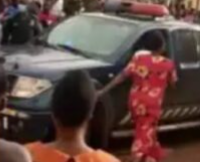 A jealous man killed his fiancée in a brutal way in Zimbabwe because he thought she was cheating on him.

Vundla, 49, stabbed his long-term partner, Sithokozile Sibanda, in the chest more than five times. The suspect claims he did this because he suspected she was cheating on him when she received $5 from another man.

The tragic occurrence is reported to have occurred in Zimbabwe’s Esigodini area on Wednesday, November 30, 2022.

It was also claimed that after brutally murdering his girlfriend, he kept her body for two days and sexually assaulted it. On the third day, he tried to kill himself by drinking from a bottle of insecticide, but a neighbor stopped him.

Witnesses say that the suspect found out about a week ago that $5 in mobile money had been sent to his girlfriend while she was holding her phone.

The suspect became enraged and demanded to know who had sent her the money. She, on the other hand, remained silent, which eventually resulted in her murder.